Outemu switches are a good alternative to Cherry MX switches for those who want to purchase a budget mechanical keyboard. Outemu switches typically don’t last as long as Cherry switches and have slightly more rattle, but are a good price. Outemu offers Blue, Red, Brown, and Black switches.

We’ll dig more into our analysis of Outemu switches and discuss what makes them a good budget switch.

What are Outemu Switches?

To explain exactly what Outemu switches are, I will first need to give you a little background information on Cherry MX and the original switch patent.

Outemu switches are a line of Cherry clone switches manufactured in China. Cherry is a German company that initially held the patent for mechancial keyboard switches, but when the patent expired, it spawned a series of budget clone switches from companies such as Outemu, Gateron, and Kailh.

The clone switches added a new level of competition to the market and many budget keyboard manufacturers now install the clone switches in their keyboards because they are cheaper to manufacture and aren’t held to the same strict standards that Cherry is.

Outemu are often considered the most budget-friendly of the clone switches and many people enjoy all the switches have to offer. They currently have four switches in their lineup, Outemu Blue, Red, Brown, and Black. You can read about our comparison of all the different switch types here.

Outemu switches are usually found on budget keyboards and are the cheapest switches you can find, for the most part. Surprisingly, these switches feel quite nice despite the budget price.

The only downside to Outemu switches is they can feel somewhat rattly and shaky. I believe this is because the parts are not toleranced as precisely as Cherry MX switches which leaves a little bit of extra wiggle room. Outemu switches also struggle with a lack of durability as they are not rated for 100 million keystrokes, unlike Cherry MX.

In general, Outemu switches are an excellent switch for the price but they definitely come with some tradeoffs. They don’t feel quite as good as Cherry MX or Gateron switches, but they do outperform some other clone switches. If you’re looking for a budget mechanical keyboard, getting one with Outemu switches can be a great way to save on cost with minimal tradeoff in performance.

In my experience, the Outemu Blue clicky switch is the best switch option they offer, their other switches just aren’t quite as good. If you’re looking for a linear or tactile switch we definitely recommend you check out other manufacturers.

Below is our comprehensive guide of the four different Outemu switches available and what makes each an excellent choice for keyboards.

The Outemu Blue Switch is a good switch for typing at its price point. Blue switches are a popular feature on more inexpensive keyboards.

The Outemu blue switch is clicky. This means that the operation force is heavier at 60 cN, and the keyboard makes more noise when the keys are pushed. This makes it evident that a key is pressed, which is good for noticing typos or accidental keystrokes whilst typing.

Because of the heaviness of the key, the activation point is lower than lighter keys, and the total distance you travel while pushing the key is higher. The tactile position is also located relatively low on the switch.

An Outemu blue switch keyboard would not be a good idea to bring to the office. The clicky switch makes the keyboard loud, making it likely to distract other office workers. The switch is much better suited at home for those who like to hear the clicks of the keys as they type.

The Outemu Blue switches have a decent spring resistance so they work well for people with lead fingers. Most large-handed people would find this switch agreeable to heavier key presses. For those with smaller hands or just a gentler touch, a switch requiring less operation force would be a better choice.

The Outemu brown switch is a popular Outemu switch among consumers. The brown switch performs well in most areas of consideration and can be used for typing and gaming, along with providing decent balance.

The Outemu brown switch is classified as a tactile switch. This means that the key acknowledges when it has been pressed with a slight bump. Such switches are suitable for typing because it allows the user to know that a key was successfully used.

For each switch, certain characteristics can help determine how the key would perform while being used for specific functions. The Outemu brown switch has an operating force of 55 cN, meaning that you have to push in the key to activate the switch. The switch also has an activation point about halfway down to the switch base.

The type of switch you buy is very dependent on the place you plan on using your keyboard. While not the loudest switch you will ever find, the Outemu brown switch can make keys noisy if you press hard enough. Such a keyboard configuration would be better suited for home use than at the office.

Outemu brown switches have a tactile bump which prevent user-error when typing and could help prevent accidental keystrokes.

Outemu brown switches could work well for most people, those with a really light touch might find the bump a little to big. The operation force is relatively high, so someone who presses rather aggressively with larger hands could find this switch enjoyable.

As previously mentioned, Outemu Brown switches are great for typing. The tactile nature is a good indicator of when you have hit a key, and the operation force is low enough that you don’t have to pound on the keys.

A brown switch is also a decent pick for gaming. The keys are not easily mistyped but require a little more force, which is not preferred by some gamers, but it really comes down to user preference.

The Outemu Red Switch is a good choice for those who have a lighter touch and require fast movement. The keys are light and easy to press. Outemu Reds are also an excellent pick for those who are on a budget.

The Outemu red switch is linear; thelack of sound and movement makes it easier to type fast on the keyboard. In terms of speed and accuracy, the switch is on the same level as the Cherry MX Red switch.

The switch has an operating force of 50 cN, so it does not take a lot of pressure to push the keys. While this makes it faster, the keyboard is prone to mistyping. Because there is no need for clicking or movement, the key’s activation point and its reset point aren’t as far down.

This switch is an excellent choice for an office computer because it is quiet and easy to use. The Red switches may take a while to get used to after switching from a tactile or clicky switch, because you will need to get used to not bottoming out. Bottoming out refers to hitting the keys too hard and slamming your fingers into the keyboard, which can lead to finger pain.

The red switch is the best fit for those who type lightly. The ideal candidate would be someone with small hands. However, big handed people that type lightly could also find the keyboard configuration a good fit.

Outemu Red switches might not be great pick for typing because of the linear switch movement. Typing on a linear switch can lead to bottoming out and more mistakes if you’re not used to the linear actuation.

While not great for typing, the Outemu Red is an excellent choice for gamers. The lightness and linear switch type make it easy to type fast and move characters around more quickly.

The Outemu black switch is a great pick for anyone that needs a heavier lienar switch.

The Outemu black switch is linear, similar to the Outemu Red switch. The switch doesn’t make too much noise when typing which is ideal for a quiet typing environment. The black switch also has an operating force of 65 cN, meaning you have to press down a little harder to have the keystroke read by the computer.

This would be the perfect switch for the office. The switch type is linear, so there wouldn’t be any noise from using the computer. Mistyping would also be avoidable because it requires a lot of force to press the keys; this force would be hard to apply on a separate key from the one you intended to push.

Outemu Black switches make a good choice for gaming and typing if the user has a heavy keystroke. The linear design makes it effective for consistent usage in gaming and the spring heaviness prevents the typist from bottoming out.

Although being a Cherry MX clone, Outemu switches can be an excellent switch for those trying to save money on their next mechanical keyboard. While not as good as Cherry MX switches, Outemu offers the best bang for your buck when it comes to balancing price, performance, and durability.

While cheaper there are some downsides to Outemu switches including increased rattle and scratchiness, along with the fact that they don’t last quite as long as Cherry MX switches.

Outemu currently offers four switches including the Outemu Blue, Brown, Red, and Black switch which feature different acutation types and forces. Next time you are looking for a budget mechancial keyboard, check out a keyboard with Outemu switches to see for yourself if you think they are good.

If you’re still on the fence about Outemu switches, we recommend finding a switch tester to try out all of the different switch types for yourself.

The Redragon Draconic K530 is one of the lastest mechanical keyboards from Redragon. The keyboard features some really interesting design choices such as wireless connectivity, hot-swappable...

Continue Reading
link to Razer Huntsman Mini vs Huntsman TE: Which is Better?

Coming with the latest optical switch design from Razer, the Huntsman lineup is quite popular. But which model of the Razer Huntsman is better, tenkeyless or 60%? Let's find out: Razer... 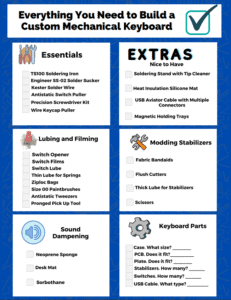 We put together a checklist to help you achieve the keyboard of your dreams. It's never been easier to build a custom keyboard. Download for FREE, no email or sign-up required.

We use cookies to ensure that we give you the best experience on our website. If you continue to use this site we will assume that you are happy with it.Ok